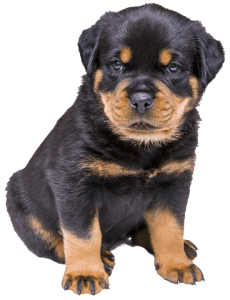 Owning a Rottweiler can be lots of fun, but can sometimes be difficult. Rottweilers sometimes get a bad rap. An introspective, noble breed with individual personalities as can vary as the people who train them, Rottweilers were once bred to herd cattle, provide companionship, or even as beasts of burden that pulled loaded wagons to Roman marketplaces. Not roles you would generally assign to a viscous beast. Unfortunately, today many people view the Rottweiler as a dangerous dog. The Rotty carries the same perception as the Pitbull and the Doberman from the 1980’s. It is no wonder why many parents ask”is a Rottweiler a good family dog?” 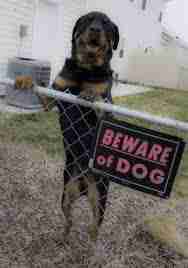 Sadly, much of that reputation comes from the lack of training & understanding the breed itself. Often abused, under exercised and winding up in the wrong family setting prevents them (Rotties) from fully developing into the dog they were intended to be. This is not the dog for a family that is pressed for time, non-active & cannot be assertive and consistent. Pent up energy, lack of clear communication and leadership is a recipe to owning a Rottweiler with aggression.

Because Rottweilers have been the focus of dog fights and aggression for a long time, owning a Rottweiller can be frustrating when sharing the same street as a person and their dog. It can be upsetting watching people go in the other direction while walking your Rotty! It is even more embarrasing if you’re unable to control your dog. This will only feed into the perception of how Rottweilers are unruly and should not be a pet. It’s no secret that Rottweilers are associated with aggression. Just go online & research “How to train a Rottweiler” and one of the auto-entries that pops up is “…. To bite on command.” Another one? “How to train a Rottweiler to attack.” It’s sad, but as with many animals if you train them to behave violently they will.

How to Reside With and Train a Rottweiler Dog

They key when figuring out how to train a Rottweiler is all in understanding the breed and even the individual dog. Rottweilers are generally quiet, calculating dogs with an air of suspicion about them meaning they won’t necessarily warm up to other dogs or humans right away. In that regard they’re the pessimists of the dog world.

It is not uncommon for guests of Rottweiler owners to feel a little uncomfortable when visiting as this is the vibe that a non-aggressive Rotty will often give off. This is the breed’s temperament. We’re not advocates of not controlling your dog, so when this happens, the dog should know and feel your presence. In other words, we’re not going to change the dog’s temperament, but we can forge a proper behavior (sit, down, stay) upon meeting people.

Something our Long Island dog training school hears all the time from potential clients with dominant dogs is “when you come in the house, the dog will check you out by sniffing and moving around you & if he likes you – you’re good.” Hope he’s not having a bad day and off with his character assesment!

It is very important to have a good understanding of the breed, but more importantly to have control over your dog regardless of his breed charateristics. Too many pet owners allow things to happen because of breed traits. When this happens, impactful incidents can occur that can place both people and your dog in harms’ way.

Being a large, muscular, and imposing breed given to territoriality means that the Rottweiler must be treated with respect and firmness but this does not, by their nature, make them dangerous. Presented here are six steps to training and owning a Rottweiler. While training methods may vary and there are certainly more ways to go about it, this will hopefully give you a guide toward training this often misunderstood pooch

These following steps only scratch the surface off training. If you reside in Nassau or Suffolk County, Long Island or Queens please feel free to check out our in-home dog training lessons for your Rottweiler.
1. Be In Charge 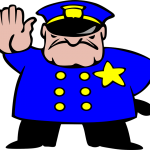 Rottweiler’s need to know who is in charge. They are territorial and leaders (as opposed to followers) by nature. Be firm and establish your position (otherwise, depending on their temperament, they’ll establish your position). They will respect you for it and are far more likely to follow your leads and your leash if they don’t think they’re the ones in charge. Rottweilers are also cautious and suspicious by nature so they may not accept your alpha status immediately but be firm and consistent. Look, owning a Rottweiler may take some work, but it sure is worth! 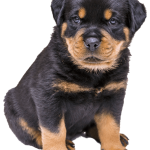 Of course this is not always an option depending on when you get your Rottweiler but young Rottweiler’s in particular are able to be trained at only a few months old. If you acquire an older Rottweiler – start obedience training ASAP. Like many dogs (and people too!) it is better to train young and prevent bad habits and behavior from ever starting in the first place.
3. Keep your Rottweiler Training Session Short

Rottweilers are smart dogs but they are easily distracted. Limit your training sessions for young dogs to under 20 minutes and not much longer than double that for an older dog. Rottweilers are intelligent animals but they also have a short attention span so don’t try to cram too much into each session. If you have taken on a dog with behavior issues (such as a dog rescued from abuse) you may be tempted to try to do too much at once, thinking you have a lot more work to do. Resist that impulse. Slow and steady still wins the race.
4. Let Them Socialize

Owning a Rottweiler, means you must figure out how to train your him or her it is important to expose them to other animals as well as people. Remember, Rottweilers are introverted, cautious animals and part of keeping their behavior manageable is to allow them to be exposed to and experience being around other creatures. Allowing your dog to be handled and pet (within reason) will also help acclimate them to being touched which will help calm them and make visits to the vet easier.

5. Learn That it is a Process and Will Take Time 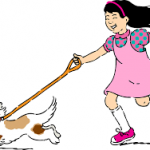 Remember when we told you that dogs need to do repeat something 2,000 times before they get it down? Rottweilers are no different. Patience is important especially when it comes to training and owning a Rottweiller. As with many dog training methods, training your Rottweiler should follow a natural progression and begin with the basics. If you can get them to understand “sit & stay” early & build a STRONG foundation in impusle control & leadership, then the rest of the commands will be easier for them to pick up & do. Don’t rush to trying to teach them to pull wagons full of olive oil to a Roman marketplace, keep it simple and go slowly. Remember, it’s a process.
6. Be Playful but Cautious

Okay, let’s address the elephant in the room. Are Rottweilers naturally aggressive? To an extent the answer is yes. Rottweiler’s may have some inborn aggressive tendencies (all breeds do; humans too) and the fact that they are so large and powerful leads to a lot of incidents that, with smaller breeds, would be far less of an incident.

Think of a father playfully wrestling with his child. The child is throwing punches and leg kicks left and right but lacks the ability to cause any serious harm. The father, for his part, knows that he cannot “fight” with his full strength because he is much stronger than his child and so he holds back.

Rottweilers can’t help themselves so it is important to not “activate” their aggressive tendencies by roughing around with them. They may not realize you are playing and you are giving them a reason to be aggressive. What’s more, you’re giving them an opportunity to win the fight and that will end badly for you.
7. Aggression Will Not Work
If you treat a dog badly they will learn violent behavior. This holds true for any dog but due to a Rottweilers natural tendencies it is more true. You do not want to encourage your dog’s aggression; you want to control it. What’s more, if your Rottweiler feels threatened they may choose to defend themselves and as we previously mentioned: that will end badly for you.

Establishing dominance and control is about being firm, consistent, and clear with your behavior towards your dog. It is not about being physically domineering over them.

Rottweilers can make excellent, loyal companions and their natural instincts will kick in if they ever need to so there is no need to train them to be aggressive, they are natural guard dogs. However, as with any animal of such strength and power they deserve a certain degree of respect and caution. If you are worried about your Rottweiler’s aggressive behavior it is always a good idea to consult a professional trainer or dog behavior specialist.